Hide Search
* Disclosure: Some of the links below are affiliate links. This means that at no additional cost to you, I will earn a commission if you go through and make a purchase.
Share97
Pin51
Tweet
148 Shares 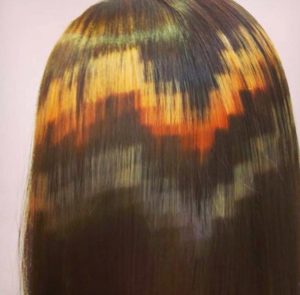 Color was in last year. We rocked shimmering blues and majestic purples, sought out temporary or non-committal ways to wear color (enter hair chalk and eye-shadow), and we were loving the ombre. Now there is a new way to glam up your highlights.

If you are one who’s into the social media scene, you would know that there is a new hair color trend that has already made the ombre stale news.

I guess you could even say it is a hybrid of the ombre. This new buzz word is ‘xpresionpixel’ hair coloring, which is a craze hitting salons in Spain , New York and London.

The technique was pioneered by three Spanish colorists Jose Luis Almendral, Marco Antonio Restrepo, and Jorge Cancer, but the technique has since been adapted for the new Revlon campaign.

For those who have never heard of it, it’s like color blocking for hair. The hair is soaked with square blocks of color and then blended with other colors to create a fun and quirky cascading effect. 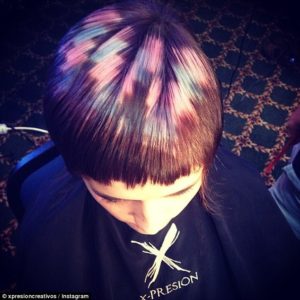 It’s like airbrushing color onto the hair (Talk about giving your highlights some character 🙂. The colors are up to you in that you can select shades close to your own natural color or from that same color family, or if you are the more adventurous type you can go all out and get contrasting neon shades.

Sounds like something you would try? Well don’t run out and try to get you a DIY kit yet. I doubt those exist. Besides, Rebecca Counsel, Art Director at HARE & BONE strongly advises that you speak to a professional color technician and do not try it at home. She further stated that the look is best suited to short hairstyles, as such styles will better display the color detail.

Now while I haven’t yet seen any black beauties sporting this new color trend, I suppose it won’t be long. Maybe we are waiting for one of our celebrities to rock it first.

Also, since the original technique seems to be semi-permanent, I guess some might still be on the fence about trying it. Either way, we’ve never really shied away from color and the more adventurous among us could have a ball with this.

Now that I think about it, perhaps someone in our community is talented enough to get the same effect using hair chalk or some eye shadow (I’m just saying ;)). So let us know: is this new pixilated color something you would try, or will you be giving this one a miss?