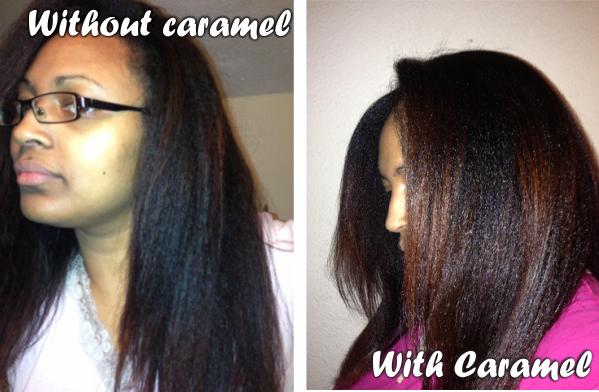 There’s something about sequels, you either love ’em or you hate ’em. I’ve always preferred The Lord Of The Rings: Two Towers and I am a huge fan of The Bourne Supremacy and don’t get me started on the Twilight saga films, like Bella I was dying to be bitten by Edward 10 minutes into the second movie!

Maybe it’s the fact that the actors have settled more into their roles the second time around or maybe it’s because we are more invested in the characters when watching a sequel. Either way, we all troop into the cinema to take a peek at our old friends and see what they are up to.

A lot of us know and love the original caramel treatment which has helped many a natural head get over really bad hair days. If you have never tried it, why-ever not? It really does work at softening natural hair and leaves it very shiny too, not bad for something you can whip up in your kitchen!

I didn’t set off trying to re-make the caramel treatment, I was simply trying to find another use for the popular flaxseed gel recipe that has many natural girls declaring that they have given up commercial gels.

I noticed that in spite of it’s sliminess, the gel goes on like one of my favorite commercial conditioners, smoothing and softening as it goes. As a side note, some detangling conditioners actually contain seaweed as one of their main ingredients. Let’s hear it for natural ingredients whoop whoop!

Moving on, this recipe is essentially a coming together of these two all natural concoctions, each bringing something to the party that will leave your hair soft, moisturized, sealed and very shiny. It’s not exactly a replica of the caramel treatment with flaxseed gel thrown in, as you will see, but the final product is similar enough to deserve to be associated with the original recipe.