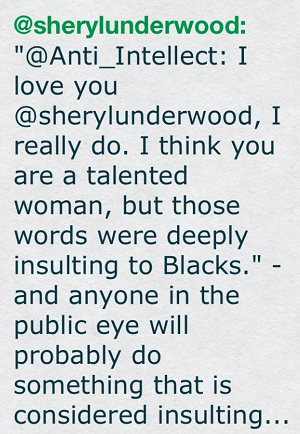 You know what let’s go with that, let us talk about jokes just for a minute. I am not in the business of comparing one negative or disparaging event to another, but just the other day Russell Simmons along with some other popular YouTubers thought it would be funny to create a video, correction a ‘sex tape’ of Harriet Tubman, getting it from behind by her white Massa.

He took a historical figure, a woman born into slavery and who was beaten repeatedly, her head bashed in by a white slave owner on one occasion and made her a common whore on a sex tape.

Call me old fashion but I do not find sex tapes generally funny, and I have no idea how someone with even two brain cells could create such a video in the name of comedic expression.

I must mention though the irony of how Harriet explained her survival the day she was hit by the slave owner, she explained that she believed her hair saved her life she said “It had never been combed and stood out like a bushel basket” protecting her skull.

Not to worry though just like Sheryl’s comments it was a just a joke! Russell Simmons has since removed the video and apologized for his lack of sensitivity.

I can’t say that I am totally surprised at Sheryl though. Well known as the funniest woman on Improv, she is blunt, pushes the envelope on topics like sex, politics, and race.

She makes jokes about ugly black people all the time and until now we haven’t really heard about her being under the gun about her opinions. We can always use the excuse that there is a time and place for everything, because maybe we might chuckle at the fact that she just compared our face to that of a monkey or a jackass under the influence of some vodka and or perhaps the special smoke in the air at a comedy club.

You might even have gone as far as high fiving the TV in the comfort of your living room as she told the same joke on BET comic view late one night. The point is your value of common decency when it comes to insults might be a tad bit lower or higher depending on the setting you are in.

Sheryl is all grown up now, she has since left the dark comedy clubs filled with special smoke and drunken laughter. She has done well for herself, taken her act to even bigger stages and platforms and is now a permanent member of main stream day time media.

We have all grown up too; we no longer think calling each other ‘nigger’ is cute despite what Jay Z told Oprah. We are working tirelessly day and night to show our little girls that the hair that naturally grows from their scalps is not ugly or hard to care for but just as fabulous as anyone else’s hair.