Hide Search
* Disclosure: Some of the links below are affiliate links. This means that at no additional cost to you, I will earn a commission if you go through and make a purchase.
Share166
Pin14
Tweet2
182 Shares 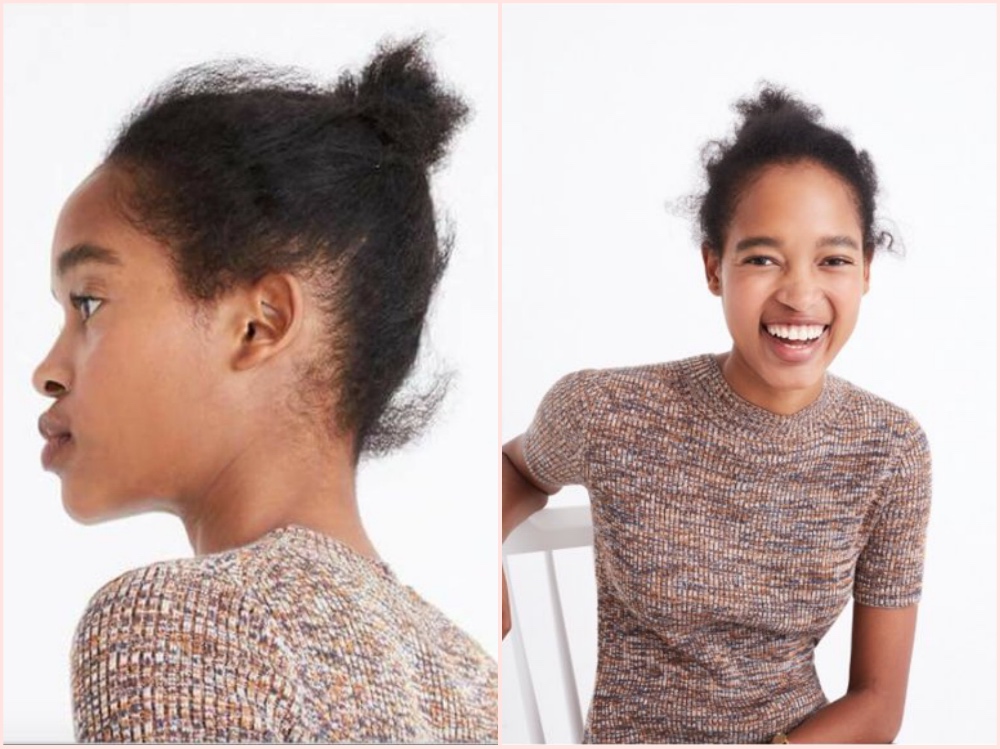 This past week we saw outrage in Twitter land when J. Crew showed a black model in one of their ad campaigns in a struggle bun. Anyone who has had short hair or is growing out a big chop will understand the struggle bun.

At that point you just don’t feel cute. There’s really nothing refined or glamorous about a struggle bun, so initially, I too felt a little disrespected. I thought, ‘ Of all the bomb styles suitable for black hair, this is the best they could do?’

And the ladies of twitter agreed, here are some choice comments:

J. Crew really got oh girl in this ad looking like “all my life I had to fight!” The disrespect is too much pic.twitter.com/5wPANG7yS3

Why does #jcrew have this beautiful black woman out here looking like this?! pic.twitter.com/gmUJu8bXNw

I’m just mad they’re talkin bout “it’s cute.” My Mama would NEVER let me out of the house looking like that growing up. The girl is cute, but that “style” isn’t. J Crew got her looking a whole fool out here

Then I started to think, well in some ways it is a realistic depiction of the black experience. How many of us wake up looking all polished 24/7 ? I’m willing to bet that many of us have had a few hair days when we were just too tired to re-twist, or the scarf came off in the middle of the night; days when we were wiped out after juggling school, work, mom wife duties and just left our hair to do what it does.

From this perspective, I started to imagine that perhaps having a few ad campaigns that capture aspects of the realities of the average black woman. So it leads me to wonder, are we being too sensitive by making a big deal out of this?

When you think about it, there are many little black girls struggling with how they look. Wouldn’t it be good for them to see that a struggle bun can make it into a catalog?

After a while, looking at the pic gave a homey feeling, like it could be me dressed in a warm sweater just relaxing, carefree in a cozy environment; not worrying about my appearance. There’s something about it that’s not uptight. Something real and believable.

Could it be possible that we’ve become so preoccupied with portraying the always glammed up version of ourselves that we force others to see only one dimension of our beauty? We are always talking about natural beauty so why is it that we seek to cover up our natural beauty that just occurs without loads of products and primping.

If we can’t see and appreciate black hair when it is ‘unkempt’ or in it’s untouched state, then isn’t there something wrong with that? We have been unconsciously setting up ourselves by allowing our men to talk flack about us if they see us in our natural un-fooled-around-with state. Perhaps by doing this we prolong the texture hierarchy that currently exists.

I dare you to say you have never at any point felt overlooked, pushed to the side after seeing only a certain hair type in a magazine. Hasn’t there been even one instance when you wished they would show real people, scenes you can relate to instead of persons who looked perfect?

If we are comfortable in our skin and are confident in who we are, if we know we are more than our hairstyles and our beauty is not defined by how others see us, why should we be up in arms over someone deciding to publish a beautiful black girl in bed head or a struggle bun?

Sure they could have styled her hair in such a way that it looked like a lot of effort went into it but then that would be fake. It wouldn’t be raw beauty and perhaps that was what they were going for.

Yes, I know that many companies have done the most to show us in some unflattering ways in a bid to promote the European trip agenda, as history shows us.

We have often complained that they don’t accept our puffs, twist-outs and cornrows and they police our texture, here it is that they are showing our raw beauty and we still complain. Maybe we really ought to know when to pick our battles.

Are we going to bat for J.Crew? Not exactly, it’s just that it seems we are never satisfied and always find a way to make a mountain out of a molehill. We can’t expect others to accept us at a twist-out if we can’t stand to see a sister in a struggle bun.

Might I suggest that J.Crew was interested in showcasing the effortless beauty of a black woman? Is that a ridiculous notion? Well some people were a bit more level headed on twitter:

Even Lupita couldn’t control what her final photo looked like on a MAGAZINE cover and y’all out here tryna blame an up and coming model in a J Crew ad. #Icannot ! https://t.co/ZTPOPXGsz0

J.Crew strives to represent every race, gender, and background. We sincerely apologize for the styling of this model and the offense that was caused. We assure you that we are taking steps to address it, and to prevent this from happening again.

If you think that is absurd perhaps some evaluation is in order, for we can’t want inclusion and acceptance of all that we embody if we can’t celebrate and accept the reality of a struggle bun. What are your views on the matter?