Hide Search
* Disclosure: Some of the links below are affiliate links. This means that at no additional cost to you, I will earn a commission if you go through and make a purchase.
Share89
Pin107
Tweet
196 Shares 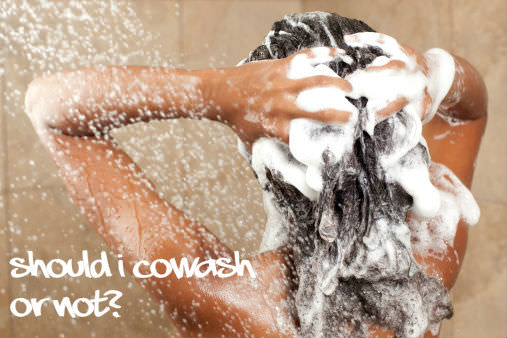 Some days ago, we talked about co-washing here, but after that I came across three YouTube videos  recently. Two were titled “Co-washing Your Hair is Unhealthy” and the other was “Stop Co-Washing Your Hair It’s Not Healthy”.

Now headlines like those are sure to grab your attention, especially if you are new to healthy hair care, and you are trying to soak up all the information you can get to build a great regimen. After all, no one wants to walk around with mildew for hair.

Basically the YouTuber Nappy2Straight made definite statements on the practice of co-washing. Many naturals swear by co-washing, so you can imagine the backlash she got for suggesting that co-washers are nasty and walk around with stinky heads.

The reason I want to talk about co-washing is that I didn’t think any of the videos adequately addressed why you might not want to do a co-wash.

It got me thinking that if I was a newbie, I’d still have unanswered questions since she didn’t tell me on what basis she formed her opinion. So today I want to shed some light on the matter to help those in the experimental stage, or those who are new to the healthy hair journey alleviate the concerns they might have with regards to co-washing.

Let me categorically state that this is in no way a jab at Nappy2Straight, in fact, I am in partial agreement with a little bit of what she says. But that is only because I have a fairly good understanding of how co-washing works, and I’ve done extensive research on it myself.

What I intend for you to take away from this article is information that will empower you to make whatever decision is right for you. I intend to do this by looking at what she has presented alongside what authoritative sources have said.

You can watch both videos here:

Sure in the second video she talked about the build-up issue, and stated that she has been a “licensed cosmetologist for 17 years” and she does “research every day”, but apart from that, the video didn’t exactly cite any scientific evidence to support the argument. As I checked some of the comments on one of the other videos, this was a major qualm for persons who had clicked on the video to get information.

It’s not so much that she has stated her opinion, it’s how it was done. She did however say in the third video that she was just giving this advice based on her “personal expertise” which she calls “facts”.

Let’s assess what she said. If you watched the second video you might have missed the part where Nappy2Straight said conditioners that are formulated for the purpose of co-washing are ok. I know I missed it, and didn’t even pick up on it until I watched a second time.

So essentially, she has indirectly endorsed co-washing by saying that it is ok once you use conditioners made specifically for that purpose, and not regular “cheapie” conditioners that are made to condition the hair.

I also found it a bit contradictory that after saying it’s ok to use products made for co-washing, that she would then say “Co-washing does not clean your hair and scalp”. She further purported that there are no cleansing agents in conditioners.

I went on the hunt and found information that counters this. I came across Dr. Susan Walker’s site, Wellness Diva, where she explained that there are surfactants or cleaning agents in shampoos as well as conditioners.

The difference is that they might tend to be a bit harsher in some shampoos. In conditioners you may find that while they may be cleansing agents, they also allow conditioning agents to get attached to the hair. She also mentioned Chaz Dean’s Wen product line. So I went in search of what was in the Wen Cleansing Conditioner.

As it turns out, Wen Cleansing Conditioner is a 5-in-1 product that is a shampoo, conditioner, deep conditioner*, leave-in and detangler. The cleansing agents in the Wen conditioner are :

Cetearyl Alcohol – a cleansing agent which is a foam booster

Behentrimonium Methosulfate – an anti-static agent that conditions, though it is a surfactant or cleansing agent.

Well by this time I was breathing a little easier, since I was seeing holes in the argument presented in the videos, but I wanted a bit more advice so I asked Dr. Kari Williams, a licensed Trichologist (hair doctor).

My advice about cleansing conditioners and co-washes is to use them supplemental to your regular shampoo. They should not completely replace the use of shampoo. Cleansing conditioners work best when used in between regular shampoos to remove excess product or dirt from the hair and scalp. Make sure you are giving your hair and scalp a deep clean once a week or once every two weeks depending on your level of activity and how much product you use. Most importantly, deep condition your hair every time you shampoo to replenish moisture into your hair strands.

In essence, it is ok to co-wash, but you should not entirely avoid shampooing at least once or twice monthly. Dr. Kari’s advice shows how you can co-wash safely without worrying that you are doing more harm than good.

So, when you assess all the information, Nappy2Straight may have a point when it comes to avoiding build-up. It would seem that she is not altogether against co-washing either, because she said using a co-washing conditioner is ok. However, what she seems to be against is the no-poo method; totally eliminating shampoo from your regimen.

While there is an absence of clear scientific studies on the validity of the practice of co-washing, Trichologists seem to concur with something similar to this YouTuber. The difference is that they do not tell you that you should stop co-washing, they tell you to ensure that you include shampoo in your regimen though you might practice co-washing.

In the final analysis, I hope you have learnt more and you are less tense about trying co-washes. Remember that while there is a flood of information out there about our hair, some are incomplete, since we are only just learning how to really cater to the black demographic and much of the research on hair was done from a Caucasian and Asian perspective.

Information about black hair care will continue to evolve, so give it time while our scholars amass the funding needed to pioneer the types of research that will provide empirical evidence unique to our hair. In the meantime, take the advice you get from others with a grain of salt, and when you’ve done your own research, do what is best for you. Are you any clearer on how you can safely co-wash?