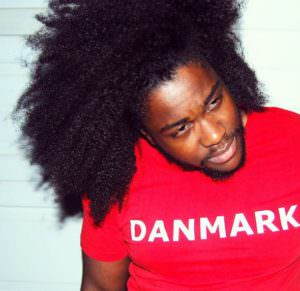 This is tricky because the truth is, we women do not think we obsess over hair, even though we value the information we get on how to take care of it. We see hair as a very important part of our overall appearance.

When a man does the same thing, is it a turn off? Men who share hair journeys and have Instagrams dedicated to hair do think hair is pretty important.

Could you date a guy who is on the same journey that you are, or is that natural hair overkill? In this case, it’s not just about length or thickness; it’s everything overall –  some women prefer to have something to themselves, and prefer not to share the ‘hobby’. It’s weird, because they might want their man to show interest (but not so much), where we plan curly hair parties together.

3. Some people think that when a man grows his hair and styles it, that it can be seen as feminine.

This might just be the reason that a woman might say, “No way, I wouldn’t date a guy with longer thicker hair than me.” Women have gone as far as to say, “I want to be the only girl in the relationship.”

Frankly this is kind of silly; hair doesn’t determine sexuality, just like if you cut all your hair off, it doesn’t mean that you are all of a sudden batting for the other team.

Guys who choose to grow their hair might get a lot of heat from male counterparts too; some who can be down right rude and discriminatory. Like with a lot of perceptions in this world, it is something we all have to work through, as more men make the decision to have longer hair.

4. Men can wear their hair more freely, and in its natural texture, than women can.

Again, a matter of opinion, but I think a guy can rock his natural texture untamed, free of gel and product, and we say, ‘dang he looks good”. However, when a woman does the same, we say, “Did you just get out of bed and come to work?” Clearly, there is a double standard in some circles.

Women are more likely to do a style with their hair, so that they can be presentable and they should. I also think that a guy should too; if you are going to grow your hair out, you should groom it!

Hair is a form of expression for both men and women, and as more women use their own hair to express creativity, or just to make their lives easier, men might feel that can do the same thing.

The questions about how we feel about a man with long hair generally, or with the idea that they might have longer or thicker hair than us is only relevant, because the acknowledgement of the beauty of natural hair is so much more relevant now.

Truth be told, men might have been growing out and accepting their hair way before women did in some cases, so even though there is no clear answer, the questions are interesting – to say the least.

So let’s have the discussion: would you date a man with longer, thicker hair than yours?

Home » Recently Added » GENERAL ARTICLES » OPINION » CONTROVERSIAL OPINION » Would You Date A Guy Whose Hair Is Longer Or Thicker Than Yours?