Look at these two images and see if you can figure out which one is kinky and which one came up as coily after a simple Google search: 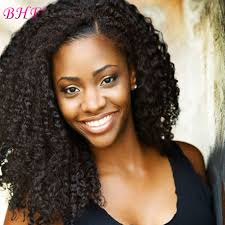 Both images are of the gorgeous Teyona Parris. The image on the left came up in the search for coily and the one on the right came up in a search for kinky(affiliate link). Can someone explain why the same head of hair would fall under two different classifications?

This left me thinking that the words cannot be used as definite descriptions of what your hair is like since it would seem that both states are dependent on styling the outcome of the styling.

Now based on Squeaky89’s comment, kinky(affiliate link) can be the thick and full, well moisturized looking hair that snaps back into place when it is stretched, but it can also be wirey. Those seem like two totally different things if you ask me. Nonetheless, that may be the perception of many others and who can blame them?

I mean, when you think of it we’re all still learning about our hair and we are just trying to make sense of it. Traditionally not much has been written down in the mainstream to help direct us as to definite classifications about traits that help create our identity. Even if our ancestors had it written hundreds of years ago, it would’ve been destroyed by the oppressors.

Just think about it; every trace of who we are, our accomplishments, lost. Even the language we speak is borrowed so you would rarely find anything about us there. How then would we know what words to use to properly classify it for ourselves?

In the final analysis, I figure that perhaps the terms are used based on each person’s interpretation of them. It may very well rely on visual appeal and the prerogative of the beholder, rather than any innate characteristic or trait determined by science.

What is sure is that even the quest to simplify how you describe your hair is not as straightforward as when you say “I’m natural!” and everyone looks and sees that your hair isn’t altered by thermal or chemical agents. This makes it hard for someone to know whether or not they are accurate in their description when using the words curly, kinky, coily.

So where does this leave me in my quest for a simplified description of hair? I guess it’s back to the drawing board. I don’t think I’m any clearer on which term is used for what type of hair. I suppose in the greater scheme of things it really doesn’t matter and we should just be grateful to have hair.  🙂

What are your thoughts on the subject? Do you think you have curly, kinky or coily hair?