Hide Search
* Disclosure: Some of the links below are affiliate links. This means that at no additional cost to you, I will earn a commission if you go through and make a purchase.
Share32
Pin12
Tweet
44 Shares 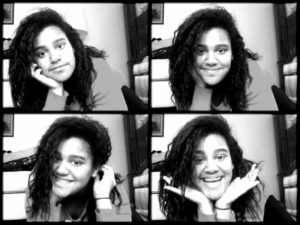 Hiya! I’m Sierra Kincaid-White. I am still very young, but I have dreams of long healthy hair. I am a crazy mix of Blackfoot Native American, Cherokee Native American, Crow Native American, German, Moroccan, Trinidadian, Scottish, Irish, African American, Israeli, Portuguese, and British. What a mix, huh?! I Live in the Metro Detroit area with my family. I lover learning new languages, and I play the guitar, violin, and piano.

Are you relaxed, natural, texturized or texlaxed?

What’s your story, how did you get to where you are?

When I was ages 3-8, my mother always brushed back my hair into tight braids. I hated it and I hated what it did to my hair. I lived in the suburbs so I was surrounded by people with straight hair. I was envious of how little they worried about their hair. I was (and still am) VERY tender-headed. So I just had my mother flat-iron* my hair and cut bangs for me so that I would fit in more.

After a while we had some problems in my family which caused my little sister and I to have to live with my disabled grandmother in Charlseton, West Virginia (which is where I was born). I didn’t know how to do my hair and my Gigi (that’s what I call my grandmother) was unable to do my hair.

I was in the fourth grade and the kids were brutal. I treated my hair like I was one of them with pin-straight hair. I washed it every time I got in the shower, I barely conditioned, I dry-brushed it, and I pulled it back into messy buns. It was horrible and also very painful. After my mother and I were reunited, we went back to straightening.

My bangs were growing out and looking pretty shaggy. When I started the sixth grade, I decided that it took to much time to constantly flat iron* it. I stopped using all heat. It was more of a “Ain’t nobody got time fo dat!” decision rather than “My hair is seriously unhealthy!” one.

I stilled pulled it back into messy buns and washed it a lot more than I should have, but I was using a LOT more conditioner and I stopped brushing it when it was dry. I noticed that my hair was a big, poofy, messy bunch of hair sitting on my head rather than the pencil-sized spirals that I remembered from when I was a toddler.

I had no knowledge of “hair journeys” or “going natural”. I also didn’t know about heat damage. I was younger so my thoughts were different. I thought that my ancestors with straight hair, like the Native American or Scottish ones were the ones giving me their hair. I know, it was silly, but I was young and I didn’t have the facts that I have today.

My hair was just not curling back like I wanted it to. I talked with my mother, she told me to use Google. I did, and about six months of research, I finally decided to go with the natural flow! I did most of the things that I was supposed to do, such as deep conditioning* and no heat. But it still was not fully back to normal.