Hide Search
* Disclosure: Some of the links below are affiliate links. This means that at no additional cost to you, I will earn a commission if you go through and make a purchase.
Share13
Pin19
Tweet
32 Shares 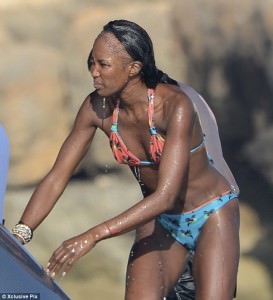 Oh Naomi Naomi. It’s hard to believe that you are 42 with that fabulous figure and lovely face. The hair on the other hand is another matter.

I don’t do celebrity ‘look-at-how-terrible-she-looks’ type articles as a matter of principle but I’m compelled to say something about the recent pictures of Naomi’s hairline.

This picture was taken last week sometime while she was on holiday. For a 40-something woman, she doesn’t look half bad in a bikini but most of us are left too dumbfounded by the state of her hair to notice. That there is textbook traction alopecia.

For those who don’t know what traction alopecia is, it’s a thinning or balding of edges caused by the tension applied when braiding hair. This may happen with weaves, wigs* or braids.

Now it’s not the first time that Naomi Campbell has had been in the news about the baldness. And should we be surprised? After years of relying on weave extensions* during her modelling career, this was bound to happen eventually right?

It wasn’t always so bad for Ms Campbell, earlier on in her career, she rocked those partial weaves something fierce!

But it all went downhill pretty sharpish after that. I’m sure you all remember seeing the bald shots from a couple of years back?

It’s good to see that Naomi bounced back straight after her unfortunate headlines; here she was a few hours after the bikini shots at an charity Olympic dinner. She is all glammed and lace wigged up, clearly having shrugged off the earlier drama.

When it comes to hair extensions* in general, I certainly don’t think it’s all doom and gloom. When used sensibly, they can be a part of any good regimen and I have used them myself with great success. There are a few things I have learned though.

1. Any kind of braiding should be done with a light hand. If you usually have someone else braid your hair, it shoud never, ever feel tight. If it does, take it out immediately. I’m sure most of us would be happier dealing with the added expense of redoing a weave every month than dealing with bald patches.