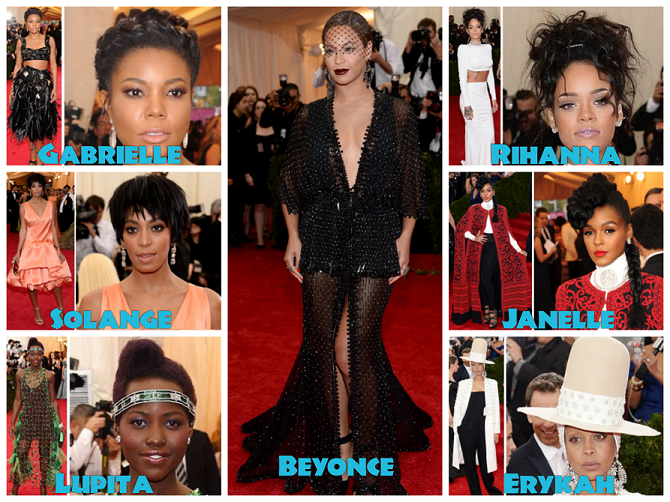 Oh the Met Gala, the place where all of fashion’s elite come, meet, mingle and take tons of pictures slash selfies. This year there are a few faces we haven’t seen in past years, like Lupita, or A$AP Rocky who looked just darling in his little suit with his fabulous alleged fiance, Chanel Iman.

Every year there are themes and the idea is that Hollywood should wear the best they could find matching the theme. Last year was punk this year was more old Hollywood meets vintage glamour in celebration of British designer Charles James. There were a lot of dark lippys and soft curls, feathers, trinkets and head pieces all of which reminded us of the 1940’s and 50’s.

Obviously it will be difficult to just focus the post on just hair because this is a fashion oriented event, the problem is, hair is fashion so lets go!

Beyonce pulled her hair back and had the dark lip but she also wore a sexy head piece, definitely one of our faves for the night and very complementary to her Givenchy risqué ensemble. You could tell she had been there before and she worked the room and the cameras like she always does, she has already claimed best dressed for the night in case you were wondering.

Lupita brought it for us too, again the hair resembled old Hollywood, she was channeling the Flappers, with the cute head piece and a Prada designer dress.

Rihanna, we did like, she did an all white Stella Mcartney crop top and skirt, and the hair was in a wispy sort of updo. Very different from the Bantu knots of last week, and we suppose more acceptable for this sort of event. She would have probably shut down the internet if she showed up there with bantu knots, Rihanna knows where her bread is buttered.

Moving on, lets talk about Miss Janelle Monae, gorgeous! the ponytail was everything and the Tadashi Shoji red and black cape outfit was different and really cool. Nobody messes with a woman in a cape! Nobody.

Now typically this woman gets nothing but love from us, but we weren’t sure what to do with Eryka Badu and her Givenchy Ensemble. She is channeling a little bit of Pharrell with the hat, and well the outfit while fashionable just appeared a bit frumpy.

Speaking of frumpy, what are your thoughts about Solange’s hair and dress? The hair was cute, it was a short pixie, not blonde, thank goodness but the dress looked too big for her, but we loved the color. The designer was Phillip Lim and I am sure the dress was made to just fall on the body, but eh not my preference.

Who is left? Gabby and Zoe, Gabby did a braided updo for the hair, she also wore a Prada crop top and skirt which is pretty trendy this season, it was kind of feathery which didn’t shoot her to the top of the list of most fashionable but fit the theme. Zoe Kravitz is a pretty girl, love the Top Shop dress, didn’t like the hair, there had to have been some better alternatives. IJS

There was lots more but in the interest of time and blog space, we will end it here.

Comment below on all the looks, and who was your best and worst dressed!