Hide Search
* Disclosure: Some of the links below are affiliate links. This means that at no additional cost to you, I will earn a commission if you go through and make a purchase.
Share427
Pin141
Tweet7
575 Shares

We are unashamed at how much we love and miss Michelle Obama and yesterday when a photo of her surfaced of just her natural hair, she literally broke the internet.

The below picture was shared everywhere with headlines like “we have waited eight years for this moment”. Twitter user @meagnacarta was the one who shared the picture though it is not clear where our former First Lady actually is.

This is the picuture I have been waiting on for like 3 years. COME ON NATURAL. pic.twitter.com/HF8AYpsciB

Barack Obama is currently writing his memoir in the French Polynesian islands ― but that didn’t stop Twitter from having a damn fit. Many social media users noted that they’ve been waiting for this natural hair moment for the longest. Others reveled in the glow of Obama’s melanin.

Twitter had a field day with the comments most of them celebrating how relaxed she is with her look and how cool it is to finally see her in all her natural glory!

@meagnacarta She’s living life and I’m all the way for it lol. pic.twitter.com/s2mQr1sgiH

To be honest there is some conflicting stories on just when the photo was taken some speculating that it was an old photo from about a year ago. It actually doesn’t matter in my opinion. Her stylist Johnny Wright did confirm that Mrs Obama’s hair has grown quite a bit.

“It has grown a tremendous amount over the past eight years. One thing that contributed to that was us going natural and moving away from chemicals,” Wright said of Obama’s lengthy hair. “I have felt that, for a women with her schedule that’s getting her hair done quite often, it’s better when it’s healthier, and it’s healthier when it’s natural. Because of that, it’s been able to grow out longer with the natural hair instead of relaxer.” 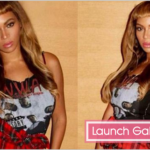