Hide Search
* Disclosure: Some of the links below are affiliate links. This means that at no additional cost to you, I will earn a commission if you go through and make a purchase.
Share13
Pin29
Tweet
42 Shares

Recently I came across the video below from popular YouTuber glamfun who’s had some distressing news from her dermatologist. In essence she noticed some thinning in areas of hair on her scalp and after which she was diagnosed as having the beginnings of Central Cetrifugal Cicatrical Alopecia.

Central centrifugal cicatricial alopecia, hot comb alopecia, or follicular degeneration syndrome is a type of alopecia first noticed in African Americans in the 1950s and reported by LoPresti et al. in 1968 as a result of application of petrolatum followed by a stove-heated iron* comb. The original theory was that the hot petrolatum would travel down to the hair root, burn the follicle, and after repetitive injury scarring would result.[1] Later CCCA was realized to affect men and women without a history significant for use of such styling techniques. Consequently, the terms “follicular degeneration syndrome” per Sperling and Sau in 1992 and then CCCA per Olsent et al. in 2003 were evolved. Plausible contributing factors may include other African-American styling techniques such as relaxers, tight braids, heavy extensions*, certain oils*, gels or pomades.

Yet another reason not to put anything but a natural oil near your scalp methinks. Anyway, if you have watched the video you will know that the dermatologist both recommended an ointment to help deal with the inflammation as well as a suggestion to consider relaxing her hair.

Glamfun has shown concern over the fact that the cream she was given contains petroleum/mineral oil* in it. The pharmaceutical industry uses mineral oil widely in their topical products because it is lightweight, but mostly because it is incredibly cheap.

There was also a 2005 study in the Journal of Cosmetic Dermatology which found that the purified and highly refined mineral oil* used in the cosmetics industry actually doesn’t clog pores. But I’m not sure I would completely take the results from just one study as the last word on the subject.

I also understand that most of us after having seen our hair’s health improve after ditching the mineral oil, the thought of having to use a product containing it again is frankly repulsive.

A Relaxer To The Rescue?

What really surprised me though was that the dermatologist suggested that she should get a relaxer to deal with the condition.

I am no doctor but I find this extraordinary advice especially considering that relaxers are noted as a possible cause of alopecia in the first place. Not to mention all the success stories from ladies who have had long standing bald patches begin to grow back in once they stopped using relaxers.

I can totally understand why one would think that a relaxer would help in her situation. With straight hair, the need to braid after every wash would undoubtedly be removed. This would mean less pulling on her scalp. But would it resolve the inflammation permanently when a relaxer is being re-applied every few months? Somehow I doubt it.

The truth is that treatments for Central Cetrifugal Cicatrical Alopecia are purely investigational at the moment which is fancy talk for there is no cure or treatment available yet. For this reason I think it would be important to follow a course of treatment that is the least likely to cause further scalp problems. Like I said, I am no doctor but somehow I don’t think that a relaxer is the answer.

What would you do if you were in her situation? 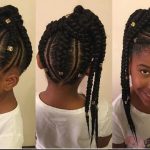